Andrew Maguire recently obtained summary judgment for c.£2 million on behalf of his client in Jones v Persons Unknown and Others [2022] EWHC 2543 (Comm) which contained four new developments in the English High Court: (1) the imposition of a constructive trust between a crypto exchange and a victim of crypto fraud; (2) an order for delivery up of Bitcoin; (3) summary judgment served by NFT airdrop and (4) a costs order awarded in the equivalent Bitcoin.

The English High Court is again shown to be willing to assist the victims of theft and extend the boundaries of English law in relation to the recovery of stolen cryptoassets. The innovative application of English law processes and remedies to the growing problem of crypto theft is of wide-ranging assistance to the victims of this increasingly widespread practice by unknown criminals, utilising wallets located in innocent exchanges.

In Jones, interim and final freezing and proprietary injunctive relief had been granted against three categories of Persons Unknown and the wallet provider, Huobi Global Limited (“Huobi”), a Seychelles registered company operating a crypto exchange.

Thereafter, an application for summary judgment and delivery up was made and the court, in the absence of any appearance from the defendants, entered summary judgment in favour of the claimant victim of fraud.

In connection with so doing, the court held that the relevant stolen cryptocurrency was held on constructive trust, which enabled the Court to order the defendants (including the exchange) to deliver up the relevant Bitcoin cryptocurrency or otherwise restore it to the victim.

The case is also the first reported example of a cryptocurrency fraud claim being determined by way of summary judgment with the court permitting the order to be served by NFT airdrop.

Finally, indemnity costs were awarded of £138,000 which were ordered to be paid in Bitcoin.

The claim arose from a pig butchering scam which is a type of fraud in which criminals lure victims into digital relationships to build trust before convincing them to invest in cryptocurrency platforms. Unbeknownst to the victim, the fraudsters control the platforms and will eventually take all the money and vanish.

Mr Jones was the victim of a large scale cyber fraud perpetrated by a group of online cyber criminals located overseas. That fraud targeted individuals through a website known as www.extickpro.com, which is a fake crypto investment company promising high returns and persuading clients to set up cryptocurrency accounts on Extick Pro, the EP platform and to transfer cryptocurrency to this fake online trading platform, which had been shut down.

In this instance, the fraudsters persuaded Mr Jones to transfer a total of 89.61616088 Bitcoin (worth approximately £1.54m as at the date of judgment) to a fake crypto investment platform promising high returns. Representatives of the fraudulent investment platform used remote desktop software to place non-existent ‘trades’ on Mr Jones’s behalf. However, whenever Mr Jones asked to withdraw his crypto he was unable to do so, and instead received various excuses as to why his requested withdrawals were delayed.

Mr Jones instructed an investigations firm to trace his Bitcoin to a wallet associated with Huobi, a Seychelles company operating a crypto exchange. To seek to secure the misappropriated Bitcoin and prevent further dissipation, Mr Jones sought and obtained a worldwide freezing injunction against the unknown fraudsters, and a proprietary injunction against the fraudsters and Huobi. He also issued claims against the fraudsters for deceit and unjust enrichment, and against Huobi as constructive trustee of his Bitcoin.

Mr Jones presented a “stark and simple case of deceit and unjust enrichment” with no evidence to the contrary adduced by the fraudsters or submissions made by Huobi or otherwise engaged in, the proceedings.

The English High Court also ordered an extension post-judgment of the freezing and proprietary injunctions already obtained until such time as the Bitcoin had been delivered up.

The court stated that “no traditional means of service are likely to be effective in relation to the [fraudsters]” and “this is an exceptional case”. The court therefore granted permission for service by various alternative means including via an NFT airdrop into the Huobi wallet. The court was satisfied that service by NFT airdrop was appropriate because it was important that the order came to the attention of the defendants quickly, given that 89.61616088 Bitcoin “could be dissipated at any moment simply at the flick of a mouse”.  It considered that service via NFT was one of the means “most likely to bring the proceedings and this order to attention of” the fraudsters.

Future claims
Given the current prevalence of crypto fraud where the fraudsters are often difficult to identify and locate, this case will be of use to investor victims seeking to trace their stolen cryptoassets against not merely the fraudsters but also the innocent facilitators, being the exchanges, on the grounds that they hold misappropriated cryptoassets as constructive trustees for the victims of fraud. Tracing such assets just became appreciably easier, given the appropriate factual circumstances.

If providing a cross-undertaking in damages is an issue, Andrew Maguire obtained a rare Order in the High Court for a cross-undertaking to be provided which has no value (as the fraudsters had stolen all of the victim’s life savings) : see XY v Persons Unknown and Binance Holdings Ltd [2021] EWHC 3352 (Comm) at [18]-[19] per HHJ Pelling KC sitting as a High Court Judge. 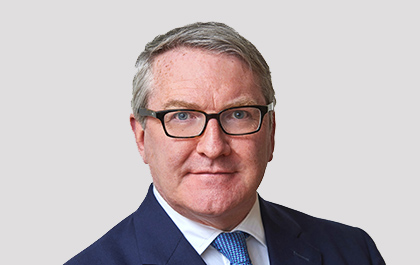